Europe, Netherlands, Zaanse Schans
The Netherlands is not only famous for its tulips but also a windmill. The windmill is a fascinating cultural heritage of other nations that became an icon of Netherlands as the "land of Windmills". 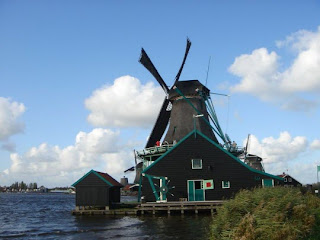 The windmill at the beginning of its existence in the Netherlands about the 13th century served to push the water into the ocean in order to form a new, more extensive land (polders) considering the geographic location of most of the Dutch territory is below sea level. With developments in technology, 17th century windmills used also as a means of helpers in agriculture and manufacturing industries such as paper, wood sharpening, removing oil from the seeds, to grind corn. Number of windmills around 10,000 centuries ago and now lives about 1000 windmills. Most of the windmills are still functioning well as a very interesting attraction. Anyone who has ever been to the Netherlands can certainly be looking for a windmill.

Most windmills are scattered throughout the Netherlands is now just a stand-alone (one building) in a location area. While that is a collection of windmills in two places and has become the most popular attractions in the Netherlands, which is the tourist area of ​​preserved or protected, Zaanse Schans in the province of Noord-Holland (North Holland Province) and Kinderdijk in the province of South Holland (South Holland Province).

Things To Do in ​​Zaanse Schans, Netherlands

Visit, the tourist area of ​​Zaanse Schans, which is conserved in addition to increasing knowledge about the function of the windmill is also well know and enjoy the beauty of the present century the Dutch way of life 17-18, also known as "Open Air Museum". Travelers can enjoy a walk along the banks of the River Zaan, visit the many attractions in the region. Can also tour boat ride down the river (Rondvaart) is a very valuable experience that exists only in this country windmills.

Zaanse Schans tourist area is located within the area of capital Zaanstad Zaandam and famous as well as Europe's first industrial city. Zaanse Schan tourist area in the adjacent town of Zaandam Zaandijk. Arriving at Zaandijk after using transporatasi train that stops at the station aan de Zaan Koog will look great Zaan River and its many windmills with a large variety of shapes and sizes, small. Then we'll breathe the smell of chocolate is very sharp from a chocolate factory are also hundreds of years old. Before arriving at the Zaanse Schans tourist areas will pass through most residential homes are still old fashioned and green berasitektur (Oud Zaandijk) and then across a bridge that is very modern, in which one part of the road bridge will be lifted up when the ship will pass through the large under the bridge.

Entering the tourist area of ​​Zaanse Schans is free of charge and direct the building will look traditional Dutch wooden houses hundreds of years old (Zaanse Huisjes)​​. Unique architecture of the most typical Dutch wooden green walls and was once a hallmark of Zaandstad homes in the area. 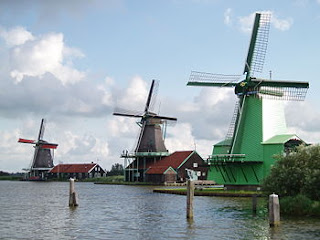 On the outskirts of the River Zaan in the tourist areas have preserved windmill-shaped collection of diverse and each windmill has its own function. Here can be seen how the windmills work for both dry land and industrial and agricultural purposes. Along the River Zaan that there are thousands of former windmill, Zaanse Schans in the region are now living, namely 6 windmill De Huisman (food manufacture Mustard sauce), De Kat (paint manufacture), De Jonge Gekroonde Poelenburg & Schaap (sawmill), De Zoeker & De Bonte Hen (oil making). Plus 2 small windmill is De Windhond (stone grinder) and De Hadel (drain water). The windmill was in the winter only opened to the public on weekends only or by appointment except Jonge Schaap is open every day. To enter the windmill and look at cost of production activity. Surely there's more wind turbines outside the tourist area of ​​the conserved region whose number of tens in this Zaanstad region.

In tourist areas there are several museums that present the life of the past century Dutch people 17-18, especially in the North Holland region. Museum collection of artifacts and Zaans save the lives of Dutch paintings hundreds of years ago. Smaller museum in the region associated with reputable companies that originally stood in Zaandam, such as Verkade Paviljoen (food manufacturers & chocolate cake), museum of the oldest and largest supermarket in the Netherlands today is Alberthijn who stood in 1887, Het Nederlandse Uurwerk (museum hours), in de Gecroonde Bakkerij Duyvekater museum (museum of bread-making). Windmills Museum can also be seen but is located in Koog aan de Zaan as he walked into the Zaandijk.

Other interesting things in Zaanse Schans, the Netherlands, is a cheese manufacturing plant as well as shops selling cheese (Catherine De Hoeve) and shoe-making factory wood clogs / Klompen (the Wooden Shoe Zaanse Schans the Workshop) which is free to enter. Klompen created a unique shape and funny, some are carved, Klompen skates and Klompen laugh. There are also manufacturers of copper sinks (The Coopery) and silver that have been around for hundreds of years as well (The Tinkoepel). One of the attractions that are new in Zaanse Schans museum that shows the Alcohol Beverage Distilling distillation process 150 years ago, of course, visitors can sample too. 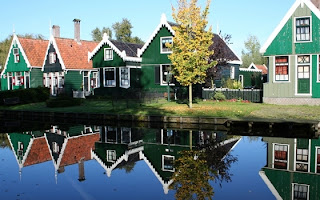 For the convenience of tourists are also souvenir shops (Vrede Souvenirs & Gift, Souvenirs & Diamonds 'Saense Lelie'), antique shops and unique (Het Jagershuis). Complementing convenience of traveling in this area are several restaurants with food and typical Dutch interior of which provides a traditional cake Dutch Pannekoek (pancake) measuring 29 cm in diameter that can be enjoyed at Restaurant De Kraai.