Asia, Indonesia, wakatobi
If you hear the name Wakatobi, it could not be separated from the nickname 'diver's paradise'. Wakatobi has all the requirements to make your admiration did not stop. Wealth under the sea and its coastal became evidence. 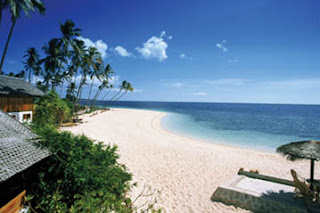 Wakatobi is a district that became a national park and is located in Southeast Sulawesi, Indonesia. Wakatobi beauty and natural wealth is well known in foreign countries. Towards Wakatobi, from Jakarta has no direct flights to Wakatobi or through Makassar.
Beauty Wakatobi is a typical region of eastern Indonesia, namely water and clear blue sea, white sandy beaches, hot sun, and the coral reefs and colorful fish. No wonder snorkeling, diving, and beach become a favorite sport here.
From the official website of tourism in Indonesia there are more than 112 types of corals scattered in 25 clusters of coral reefs, 93 species of fish, and some species of sea birds. There were also 750 of total 850 species of coral in the world.
Special, you can see the sperm whale (Physeter macrocephalus), while in November. In addition, the stingrays are classified as giant body size also plays in the Wakatobi waters. This, of course tourists will spoil while traveling there. 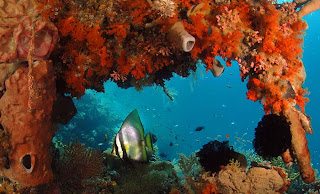 There are about 29 point dive in Wakatobi, one of which is in Kalidupa Hoga Island. The coral reefs here, colorful and very clear sea water. Do not be fooled, this place is a favorite of many foreign tourists.
Wakatobi will make you amazed not stop. Prove yourself to enjoy the beauty of Wakatobi and enjoy!
Tweet
← Newer Post Older Post → Home
Powered by Blogger.