Asia, China, Zhenyuan city
Zhenyuan city in Guizhou Province, China, had a strong magical power. Civilization is built on the banks of Wuyang River, presents an ancient city that is still maintained its authenticity. Visithere, get ready for hypnotic beauty. 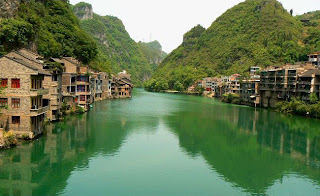 China to speak, does not mean you have been to big cities like Beijing, Shanghai, or Hong Kong. Let's look at the Guizhou Province in southwest China. Here, there is a really beautiful city but has not been touched by tourism.
Instead of tourists, tourist magnet Zhenyuan City more attached to the photographer. The city became an easy target for the camera lens, because it presents a panoramic view of ancient city life style and authentic China. Admission to this city, as if time stopped. There was no hustle and bustle and hustle, much less exhaust noise and vehicle pollution.
Wuyang River is a 'dragon' which divides the city of Zhenyuan. The head is in the north, adjacent to the southernmost part of the Great Wall of China. Not only divides the city, Wuyang River is also split the hills, high cliffs and steep canyons in the vicinity.
This town has existed since 2000 years ago. The usual first-class photographers to come in the spring and summer. This is the moment that fills most of the rice faintly green city. Cool breeze from the hills surrounding paddy-rice makes this a beautiful swing. Like the music, the rice-paddy is singing classical music. Just like the classic Zhenyuan community life.
In the city itself Zhenyuan, you can explore the lives of its people are friendly and enjoy the typical architecture of ancient China. Temples scattered throughout the city are still in a state of slick and works until now. There are also antique shops, Chinese-style houses, and restaurants serving local cuisine. You can try the freshwater fish spicy sour flavor. The same taste typical cuisine of Sichuan Province with a biting tongue. 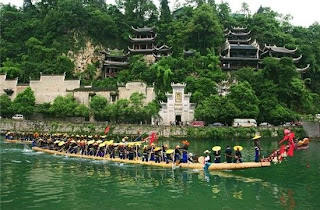 To reach this place, you can make the flight to the nearest airport in Guiyang, capital of Guizhou Province. From there, there are direct trains to Zhenyuan which took four hours away.
Tweet
← Newer Post Older Post → Home
Powered by Blogger.