5 Most Beautiful Castle In the World

Archipelago tourist attractions, Castle Tourist Attractions, Europe
A fairy tale kingdom not be complete without a castle. So beautiful and majestic image of a palace that is in the human mind. The castle is beautiful and magnificent no at only for the king and queen. Now tourists can menikmat beautiful architecture, spatial, or even around in a castle. Here are 5 most beautiful castle in the world:
1. Windsor Castle, England
Castle is located in Berkshire, England is the oldest and largest castle in the world. The castle built by the Conquerer to the residence of King William Windsor at the time. The castle is now one of the most popular tourist destinations. The architecture is beautiful and comprehensive facilities to be selling points for this one beautiful castle.
Some of the best paintings in the 11th century tower and Conquer journey into the most coveted tourist. From the tower spot visitor can enjoy the panorama Conquer fortress and the surrounding area.
Windsor Castle is also often used for state events. Therefore, before the visit to the castle, visitors are encouraged to check the schedule open it through your tour guide.
2. Neuschwanstein Castle, Germany 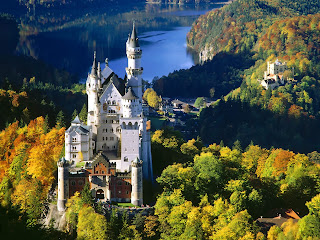 The castle is located on a pretty steep hill above the village of Hohenschwangau in southwest Bavaria, Germany was built in the 19th century.
Originally this castle should only be used as a sanctuary of the king and sealed. However, after the death of King Ludwig II in 1886, Neuschwanstein was opened to the public.
Its location on the hill allowing the tourists can see all the surrounding scenery as a whole. Neuschwanstein Castle beauty is even more perfect with the background of the mountains back of Tyrol.
Bridge connecting the two cliffs behind the castle known as the most attractive spot Jugend be. Here visitors can see and breathe fresh mountain air and beautiful panorama of the lake.
3. Peles Castle, Romania
Based on the official website of Brasov Travel Guide, the castle is located in Sinaia, Romania is considered to be one of the most beautiful in all of Europe. The Castle is also one of the last places in the living king of Romania, including King Carol I, who died in 1914.
Peles is surrounded by seven terraces decorated with statues and ornamental vases of marble rocks. Decoration using both the exterior and interior wood makes this castle looks very classic. The color of the building which is dominated by white and red colors and designs add the perfect Swiss-style beauty Peles Castle.
Inside the castle there are also 168 rooms and only 35 rooms open to the public. Rooms, which include museum that stores historical objects from the royal Romania in the basement and the rooms are on the first floor.
4. Mont St Michel Castle , France
It lies in the middle of the island in the mouth of the River Couesnon, France, made ​​the castle look so conspicuous. Rocky, cone-shaped, made ​​as if the castle is like a spear ready to pierce the sky.
The building of this castle made ​​of granite and some limestone. Built on a stone structure with a height of 84 meters adds exclusive castle. The village that surrounds it looks like the troops are ready to protect the castle from enemy attacks.
Mont St Michel Castle is located right in the middle of the island of Tidal. To reach the island is connected by a road that connected with the mainland. Its location is unique and charming architecture make Mont St Michel Castle ogled by many tourists.
5. Pena Castle, Portugal
During a visit to Portugal, you must see the beauty and splendor of Pena Castle. This romantic castle is also included in the 7 wonders of Portugal and is registered in the UNESCO world heritage site.
Become an expression of romantic 19th-century pen to deliver the most beautiful. Its architecture is very attractive with a diverse mix of styles adds to its beauty. There are eclectic style, gothic, and Islam also entered into a building that is located in the hill town of Sintra, Portugal.
Diversity can be seen from the tower dome shape. If there is seen a domed towers like mosques, churches, until the clock tower as Big Ben in London.
Has a unique variety that was wrapped with a beautiful architecture, making Pena Castle visited by many tourists. In fact, many tourists who perpetuate their love story in the area of ​​Pena Castle.
Tweet
← Newer Post Older Post → Home
Powered by Blogger.