Smithsonian Institution's Museum, the United States is a historical research center, the science of aviation and spaceflight. Upon entering the museum that has existed since the year 1976, visitors will surely amazed to see the contents of the building. 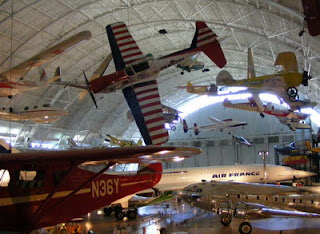 Almost the entire room filled with various types of aircraft. National Air and Space Museum has a collection of about 50,000, including aircraft, spacecraft, engines, rockets, uniforms, up to spacesuits.

Do not wrong, all the aircraft collection owned by the original museum. Space in this building is divided into two parts, namely the National Mall Building and The Steven F. Udvar-Hazy Center.

In the space of The National Mall Building, there are hundreds of amazing artifacts. Here tourists can see the 1903 Wright Flyer or the first aircraft designed by the Wright brothers. Or, Spirit of St. Louis is a single plane flown by Charles Lindbergh in the first non-stop flight from New York to Paris.

Cool, in this room neatly parked Apollo 11 command module. This spacecraft that took Neil Armstrong and Buzz Aldrin as the first to land on the moon. Still be around Apollo 11 also exhibited a variety of moon rocks that can be touched by tourists.

If on the National Mall Building lot and featuring historic spacecraft, it is different to that displayed at the Steven F. Udvar-Hazy Center. In part this room proudly parked Lockheed SR-71 Blackbird, Boeing B-29 Superfortress Enola Gay and Space Shuttle Discovery. 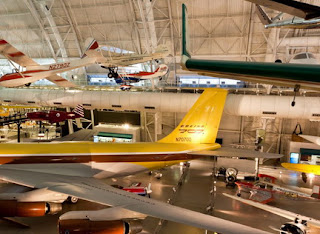 These the airplanes are the United States Air Force fleet. This war the airplanes to be residents of the National Air and Space Museum, which looks very handsome and creepy!

You will feel at the airport with various types of aircraft. Starting from the spacecraft, the war, until the aircraft are all aircraft types in this place.

Been to Washington DC, do not forget to stop by the National Air and Space Museum. This is the home of advanced aircraft the United States.
Tweet
← Newer Post Older Post → Home
Powered by Blogger.