Angkor Wat, Asia, Cambodia
At Angkor Wat person can enjoy the sunrise and sunset, with beautiful views. The most magnificent Angkor Wat and has a long history. Piles of stones form a gigantic ancient temple towering, broad, sturdy and beautiful. Angkor Watt is a temple complex located in the province of Siem Reap, Cambodia 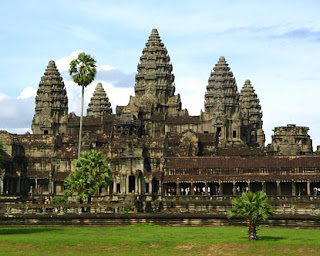 There are dozens of temples in the angkor wat. Once, a variety of functions. There is a temple being used as a place to worship the king, the king's residence, is also the abode of the saints or monks. Inside the temple there are also three swimming pools, which is said to be the bathing place of the monks, the king and royal family.

Angkor Wat was built by King Suryavarman II in the mid-12th century. It took 30 years to complete. This temple, originally built as a Hindu temple. However, along with changes in religious affiliation of the king and his subjects, in the 13th century, Angkor Wat is a Buddhist temple.

Many people believe the king of Cambodia at Angkor have blood ties with dynasty dynasty in Java, which is known for building Borobudur. Central tower of Angkor Wat is the main temple, which symbolized the center of the world, where gods and goddesses lived. Around him there and the canal wall, a symbol of the sea and the mountains that surround the world.

Another symbol is the entrance of Angkor Wat along the 500 meters, which is also flanked by an artificial river. Front of the temple before the main temple gate, connecting the natural world symbolized by the god of nature. Many people judge the condition of Angkor Wat is still good. However, while visited many stone piles visible ruins of the temple.

In some temples, restoration work was still underway. After Angkor Wat, Bayon temple is the second largest. The temple is dominated by large faces carved in the round. In front of the Bayon is the 4th stage art performances held in 2010 Trail of Civilization. 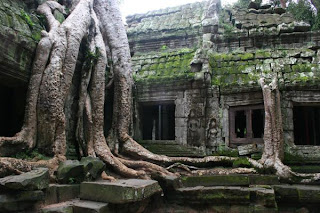 The artists from the six participating countries, including Indonesia, are also eight observer nations, though the art of performance capabilities. Ta Phrom temple is the next option. This location is unique because a lot of giant trees that surround the temple. Many temples have remained strong brittle rolled up as a large tree roots.
Tweet
← Newer Post Older Post → Home
Powered by Blogger.