Asia, Taipei, Taiwan
Even though defeated by the Burj Dubai as world's tallest building, Taipei 101 Tower is still attractive to visit. 508 meter high tower, it has become the pride of Taiwan residents. 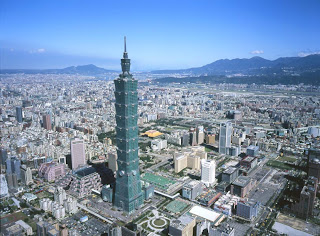 This building was inaugurated in late 2004 in conjunction with the new year fireworks are very luxurious. Tower designed by C.Y. Lee & Partners and contractors KTRT and Samsung C & T has an interior that can divert the fiber optic light signals from different places coupled with a network of satellite-speed internet 1 gigabyte per second.

Aside from being a landmark, Taipei 101 is also known as the Taipei Financial Center (Taipei Financial Center) which is a landmark skyscraper in Xinyi district, Taipei. Called Taipei 101, because the tower is comprised of over 101 floors and 5 basement (underground). Each floor is filled with a variety of facilities that are very luxurious. Ranging from office buildings, banks, shopping malls to restaurants.

For those of you who like to shop and enjoy a range of other entertainment, can get to the Taipei 101 Mall or to other fashionable shops, restaurants and clubs in the area of ​​the tower.

The famous works of art that you can see in the tower area. Starting from the concept of the traditional art of building up inside the tower. Some of the artists involved in the performance of the tower is Rebecca Horn (Germany), Robert Indiana (USA), Ariel Moscovici (France), Pu Chung (Taiwan), Jill Watson (United Kingdom) and Wu Ching (gold sculpture), Ping-huang Chang (traditional painting), Po-lin Chi (aerial photos) in the Indoor Observatory. 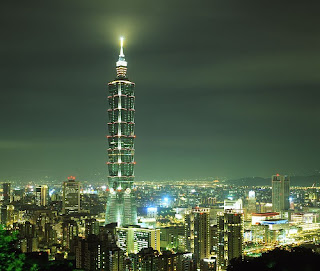 Taipei's Taipei 101 Financial Center Corporation (TFCC) has been managed by Urban Retail Properties Division International Corporation based in Chicago. Since 2004, the Taipei 101 Tower received an award from the Emporis Skyscraper Award and also serve as one of New Seven Wonders of the World (Newsweek Magazine, 2006) and Seven Wonders of Engineering (Discovery Channel, 2005).

101 Tower Records as the tallest building in the world defeated by Burj Dubai is 818 meters high at the beginning of this year. Petronas Twin Towers in Malaysia, the high reached 452 meters. For tourists who want to see the city of Taipei, get straight to the top of the tower Observatory. In this area, all visitors are not allowed to smoke.
Tweet
← Newer Post Older Post → Home
Powered by Blogger.