Asia, Bali, Besakih temple, Indonesia
Mount Agung is the most sacred mountain on the island of Bali. It's also home to Besakih Temple, the largest and most sacred temple in Bali. While on vacation to Bali, you should visit these attractions.

Gunung Agung, located in the eastern of Bali has a height of 3148 meters above sea level (masl). Meanwhile, perched on the slopes of the mountain with an altitude of about 1,000 masl (3,000 ft) there are Besakih temple which the mother temple in Bali. 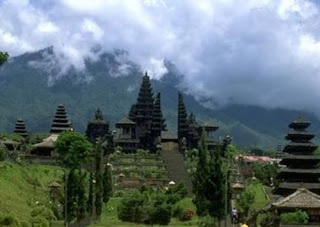 Built before 1000 AD, Besakih temple is originally a terraced temple dedicated to the god (dragon Besakih) are believed to inhabit the sacred mountain. Besakih Temple is said to be the only temple where a Hindu of any caste can worship. In here there are three main temples dedicated to Shiva, Brahma and Vishnu.

Climb the stairs through the monumental gate to the courtyard of the main temple, you will find Panataran Agung Temple, which is dedicated to the Hindu trinity of Shiva, Brahma, Vishnu and wrapped in cloth and decorated with flower offerings. 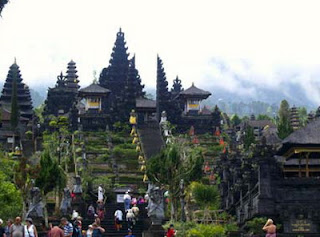 There are many other temples to explore at Besakih, but many of them just to worship and closed to visitors.

A tips that will certainly be useful if you are not traveling as part of the tour is arriving at the temple before at 09.00 pm. It is the right time before the tourist buses arrived.
Tweet
← Newer Post Older Post → Home
Powered by Blogger.