Jordan, Middle East Asia, Tourist Attractions
Tourist attractions in Jordan emphasizes the history and archeology, and the most famous is Petra. Petra is an ancient city carved into the mountain wall and part amazing wonders of the world, which attracts millions of tourists each year.

The new atmosphere is thick with the Arab culture becomes the most valuable experiences while on vacation to Jordan. The arrival of the guests were welcomed by friendly locals in a traditional greeting and handshaking to inform their cultural traditions.

Here are top tourist attractions in Jordan you can visit: 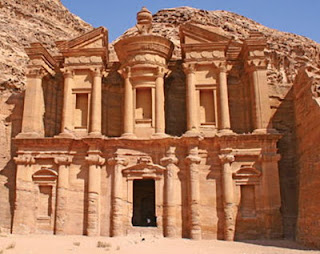 Petra is a city founded by chiseling stone walls in Jordan. Petra comes from the Greek word meaning 'stone'. Petra is a symbol of protection techniques. This word refers to the city building made ​​of stones in the Wadi Araba, a bercadas in Jordan valley. The city was founded by digging and carving rocks as high as 40 meters. Petra can be taken approximately 3-5 hours journey by road from Amman, Jordan,

Petra was the capital of the Nabatean kingdom. Founded in 9 BC-40 AD by King Aretas IV as a city that is difficult to penetrate the enemy and secure from natural disasters such as sandstorms. Petra Nabatean tribes build the irrigation system extremely complex. There are water tunnels and water chambers that deliver clean water to the city, thus preventing sudden flooding. They also have a hydraulic technology to lift water. There is also a theater that can accommodate 4,000 people. Today, the Palace Tomb Hellenistis height of 42 meters that has an impressive standing there. 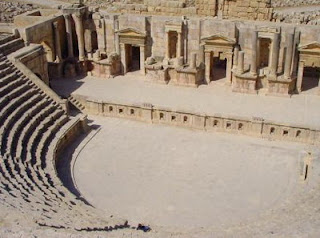 Jerash is the second most popular cities visited by the tourists after Petra. According to historical records Jerash has been inhabited since 3200 BC to 1600 AD Jerash city is divided into two, old city and new city. Old city or old city is a city which is the ancient Roman heritage building. While the new cityatau new town is where the population now lives Jordan.

City of Jerash has another attraction. Here can be found in various places such as the Oval Plaza meeting. Large field oval, surrounded by towering masts. This ancient city also has a magnificent theater, called the South Theater. Its uniqueness, has a natural acoustic system as a loudspeaker, a typical theater building thousands of centuries ago. Each Jerash Festival was held in July featuring a variety of local and international dance. 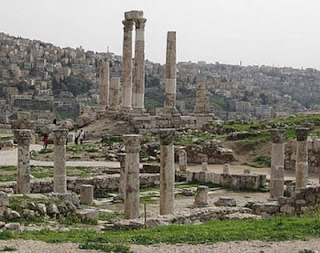 Citadel, located on a hilltop not far from the traditional markets of Al Balad. A relic that reminds us of the Roman Empire, and the early rise of Islam Bizantinum. Remains of buildings with masts towering above the city of Amman, people said this is a relic of Hercules. The building is crumbling and in ruins. occupied by the Romans (162-166 AD), much larger than the one in Rome. 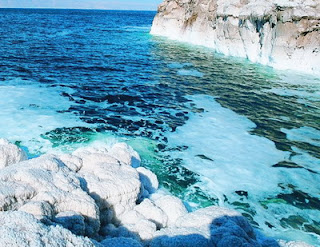 The Dead Sea has a salt content of 31.5%, approximately 8.6 times higher than the other sea. Therefore, there is no living organism, a kind of fish or moss, which can live in this lake. This is why often referred to as the "Dead Sea".

Because of the high salt content so we can easily float on water. Marine mud has its own benefits for women, especially for the skin. In addition to the salt content is extremely high, the Dead Sea water also contains potassium, magnesium, and bromium, maybe that's why the Dead Sea mud is considered to be highly efficacious.

The Dead Sea area is home to numerous world-class resorts such as the Kempinski, Mövenpick and Marriott. In addition, there are water parks, a public beach and international restaurants. 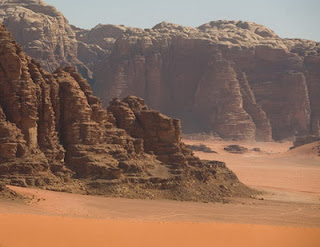 Wadi Rum, which is located about 320 km south of Amman is a place that can help you to imagine life on the moon or on Mars. A maze of monolithic rock as if rising from the desert floor, towering as high as 1,750 meters creating a natural challenge for serious mountaineers. Hikers can enjoy the peace of the empty spaces with no boundaries, exploring the canyons and water holes to find the image on the old stone wall 4000 yearsand many other spectacular treasures this vast wilderness. Wadi Rum is also known as the Valley of the Moon, a pink desert and jagged peaks in the south of Jordan.
Tweet
← Newer Post Older Post → Home
Powered by Blogger.