Africa, Djenne Mosque, Mali
Djenne City is located in Mali, West Africa, keep the magic of a mosque. Djenne Mosque has a unique structure made ​​of mud. Brick, cement, or concrete, fair use as building material. But, what if a mosque made ​​of mud? Djenne mosque in West Africa, still standing upright since 1907, although made ​​from mud. Djenne mosque is also known as the world's largest mud building. 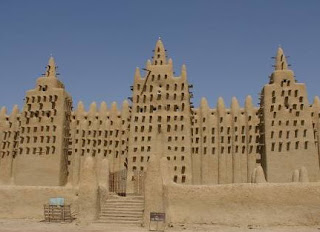 Strange but true, everyone would not would think if the mosque was made ​​of mud. However, the mud used for this mosque is not arbitrary. Previously, mud brick, known as Férey dried prior to use solar heat. To enhance performance, Djenne mosque walls plastered using mud. Therefore, when looking from the outside of the building has a smooth appearance with a regular curve.

Form of the mosque is also adjusting to it is situated in a hot climate countries. With mud walls having a thickness of about 40 cm-60 cm apart to hold the weight of the mosque, also serves to protect the inside of the mosque from the sun.

Thus, the wall of the mosque during the day will feel warm and at night to cool down slowly. Wooden structure that sustains the existence of this mosque also gives the impression of cool parts of the mosque. Mosque of Djenne is the pride of the community can accommodate about 3,000 worshipers.

However, the location of the mosque Djenna close to the Bani River makes it susceptible to flooding when the river overflowed during the rainy season. When spring arrives, thousands of people prepared to Djenne mosque was plastered back with mud mixed with chaff. 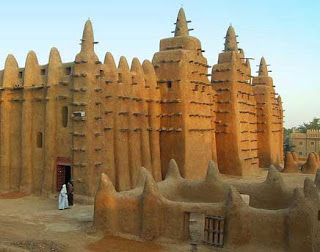 Created with a unique design, the mosque area of ​​5625 square meters is too well known to the whole world. Many Muslims and tourists from around the world are curious and took the time to stop at the mosque Djenne.

Each year, the mosque is included in the UNESCO site of world history is a favorite destination in West Africa. Not just traveling or worshiping, some tourists also take advantage of his arrival to deepen knowledge of Islam.
Tweet
← Newer Post Older Post → Home
Powered by Blogger.