Lumbini, Nepal
Maybe you've seen many statues of Buddha in China. But if you go to Nepal, there is also a Buddhist pilgrimage site called Lumbini.

Lumbini (in Sanskrit means "beautiful") is a Buddhist pilgrimage site located in the city of Nepal Kapilvastu, Kapilvastu district, or more precisely near the border of India. If you look at the pages, in this place there is a large garden with various plants, including the pipal tree. But most important are the temple of Maya Devi and several artificial Ashoka stupa. 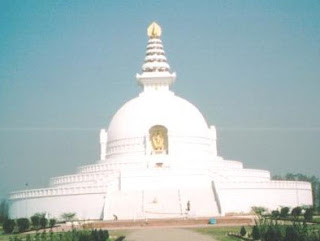 In Lumbini there is also a modern temple to the ancient ruins of the fence. But unfortunately some of the statues and other artifacts could not be found because currently stored at the National Musuem of Kathmandu. On the south side of the temple, there is a holy pool that was once used by the Maya Devi bath before giving birth and the baby was considered the Buddha that washed by two dragons in this pool.

Buddhist pilgrimage sites in order to stay awake, there is ​​a small fence decorated with prayer flags and banners Ashoka Pillar near the temple. Around this place is also provided a place for prayer and a bowl to put the incense.

For those of you who want to see the top of this Buddhist temple of gold turn to Kathmandu. At the top of the temple there is a small rectangular tower with Buddha eyes on each side and gold on top.

You need to know that, Siddharta Gautama who first founded the Buddhist religion. And Lumbini was used as the birthplace of Gautama Buddha (Siddharta Gautama another name) in the 7th century BC or 6. Maya Devi (Mayadevi) is the mother of Siddharta Gautama. This woman has given birth to the future of the Buddha under a tree, when he traveled to his parents' house in Devadaha in May of 642 BC. Lumbini is also one of the four Buddhist pilgrimage sites (in addition to Bodh Gaya, Sarnath and Kushinagar in India) that tell the big events in the life of Siddharta Gautama. Interestingly, almost all the events going on under the trees.