Europe, Sarajevo
Sarajevo, capital of Bosnia and Herzegovina, like a newly discovered lost pearl. Located in a valley surrounded by rolling hills and rows of Dinaric Alps. Sarajevo become one of the most interesting town history in Europe. It is a city which become the melting of the three religions, generate high tolerance on the community. 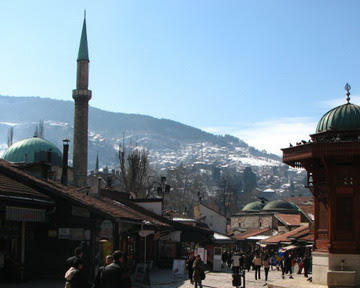 Sarajevo had seized by Roman Catholicism, Orthodox Christianity, and Islam brought by the Ottoman empire Turkish origin. A touch of eastern atmosphere seemed very dominant. In fact, many tourists thought they were in the Middle East.

Downtown Sarajevo is located in Ferhadija, starting from the monument called the Eternal Flame, a torch accidentally lit continuously to commemorate the victory of the former Yugoslavia in 1945 had forced German leader, Hitler. From there, you can see the diversity of building styles influenced communist simple style, combined with the Austro-Hungarian style buildings are impressive classical and ornamental.

If you go any further, you will arrive at Slatko Cose. This is where the typical range of stores selling snacks Bosnia, most of it has sweet taste, and the cafe and pub serving typical Turkish coffee and snacks. The road made ​​of gravel rock composition, and style of the building is much more influenced classical Turkish architecture Islamic nuanced, combined with the influence of ancient Rome, presents a different atmosphere.

In an area that is also known as the Turkish Quarter, there is the Great Mosque Begova which has a beautiful garden with shady trees, most of age of the tree has reached hundreds of years. This is one of the city landmarks that must be included in the agenda of your visit at Sarajevo.

The main attraction of this city is Stari Grad (Old Town). Stari Grad is a cultural meeting point of Asia and Europe for hundreds of years. For example, if seen from the buildings, on the east of Stari Grad many buildings influenced Ottoman culture. If it goes to the west side, many buildings were affected Austro-Hungarian culture. Indeed, Bosnia-Herzegovina had ruled the Ottoman Empire for four centuries and then by the Austro-Hungarian Empire.

In Old Town, you can visit Morica Han, who used to be a inn of the merchants of the Ottoman Empire. First floor includes 43 rooms, now transformed into a carpet store as well as a traditional restaurant. In walls, there are sculptured works of poetry titled Rubaiyat Omar Khayam, the famous Persian poet in the 12th century.

Just 20 minutes' walk from the Old Town, you've arrived in the suburbs of Sarajevo. Vrelo Bosne, a beautiful lake and park for an afternoon stroll and picnic with friends and lovers. Beautiful view of the city of Sarajevo you can see from the Yellow Fortress, which also became the heroes of Sarajevo cemetery.

In addition, Sarajevo has several museums to enrich the culture and history. Bosnian Historical Museum, the National Museum, Sarajevo Tunnel Museum, and Sarajevo City Museum are some of them.
Tweet
← Newer Post Older Post → Home
Powered by Blogger.