Belgium, Brussels, Tourist Attractions
There are so many tourist attractions in Brussels. Brussels is the capital city of Belgium and the European Union save a lot of beauty, historic sites, and places of interest. Among European countries, Brussels has tourist attractions that should not be missed. Brussels became the two-time civilization. There is the grandeur of ancient European buildings that became a symbol of the splendor of this city in the past, besides also tucked modern skyscraper with a wealth of contemporary architecture. The city is like a time when a meeting between the past and the present.

Brussels has grown since the 6th century. Originally is a village in the plains of the River Senne, already previously as air cool area . The city of Brussels is now unforgettable as the city's most impressive parks in mainland Europe. This small town can be reached by all means of transportation by land, sea or air. 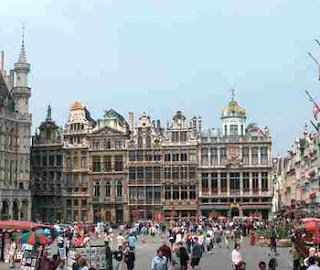 Grand Place is a town square surrounded by old buildings towering. Formerly this place was the location of the execution of the prisoners and now has turned into an amazing tourist sites, and is often used as a venue of cultural festivals. There are three main buildings in the Grand Place can be visited, namely, town hall, house kings, and trade buildings (Guli House). Grand Place has been established as one of the UNESCO World Heritage Site. 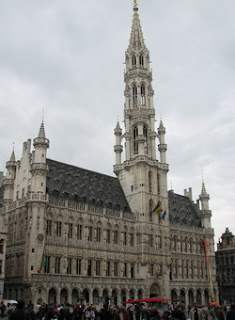 Once in Grand Palace area you will be greeted by the old town hall tower with gothic style. The building was built in the 1400's by architect Jan Van Ruysbrueck architecture. At the top of the tower of the building is a statue of St. Michael who is destroying demons. It is an attractive building with arched windows, towers and adorned with sculptures. 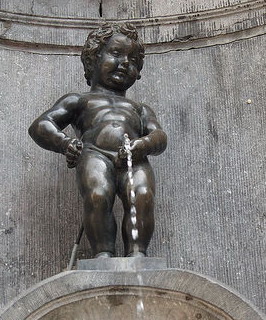 statue of a little boy being piss. There are many legends about the existence of the statue. One of them, a small boy named Juliaanske, or small Julian is releasing a fuse on a bomb by piss on it. A heroic act done by a child to his beloved city. Julian small statue has more than 600 costumes, costumes are used at certain times, such as Santa costume for Christmas. In a typical day, 'not just his urine clear water. Could syrup or beer that is often contested Belgian beer lovers.

4. Heysel Park and the Atomium 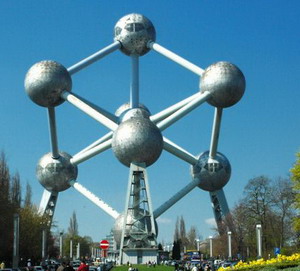 Heysel park, located in the west of Brussels, is dedicated to recreation and leisure. In 1985 the European Champions Cup tragedy took place in the Heysel stadium killing several spectators. It has been redesigned since then and renamed Stade Roi Baudoin (King Baudoin Stadium).

One of the highlights of the park is the Atomium. This is a glistening 102 metre (335 ft) high model of an atom made out of chrome and steel designed by André Waterkeyn. It was erected for the 1958 World Fair to symbolise a new 'atomic age'. It is an accurate depiction of an iron molecule that has been magnified 165 billion times. It comprises nine 18 metre diameter steel spheres connected by tupes, all of which contain exhibits. 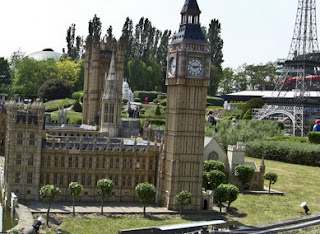 Mini-Europe is a miniature park situated in Bruparck at the foot of the Atomium in Brussels. Roughly 80 cities and 350 buildings are represented. The park contains numerous live action models (train, mills, eruption of Mount Vesuvius, Airbus, cable cars, etc.). A guide gives the details on all the monuments. At the end of the visit, the “Spirit of Europe” exhibition gives an interactive overview of the European Union in the form of multimedia games.